How Climate Change and Disease Helped The Fall of Rome

Rome’s fall gives us reason to reconsider the power of the physical and biological environment to tilt the fortunes of human societies. 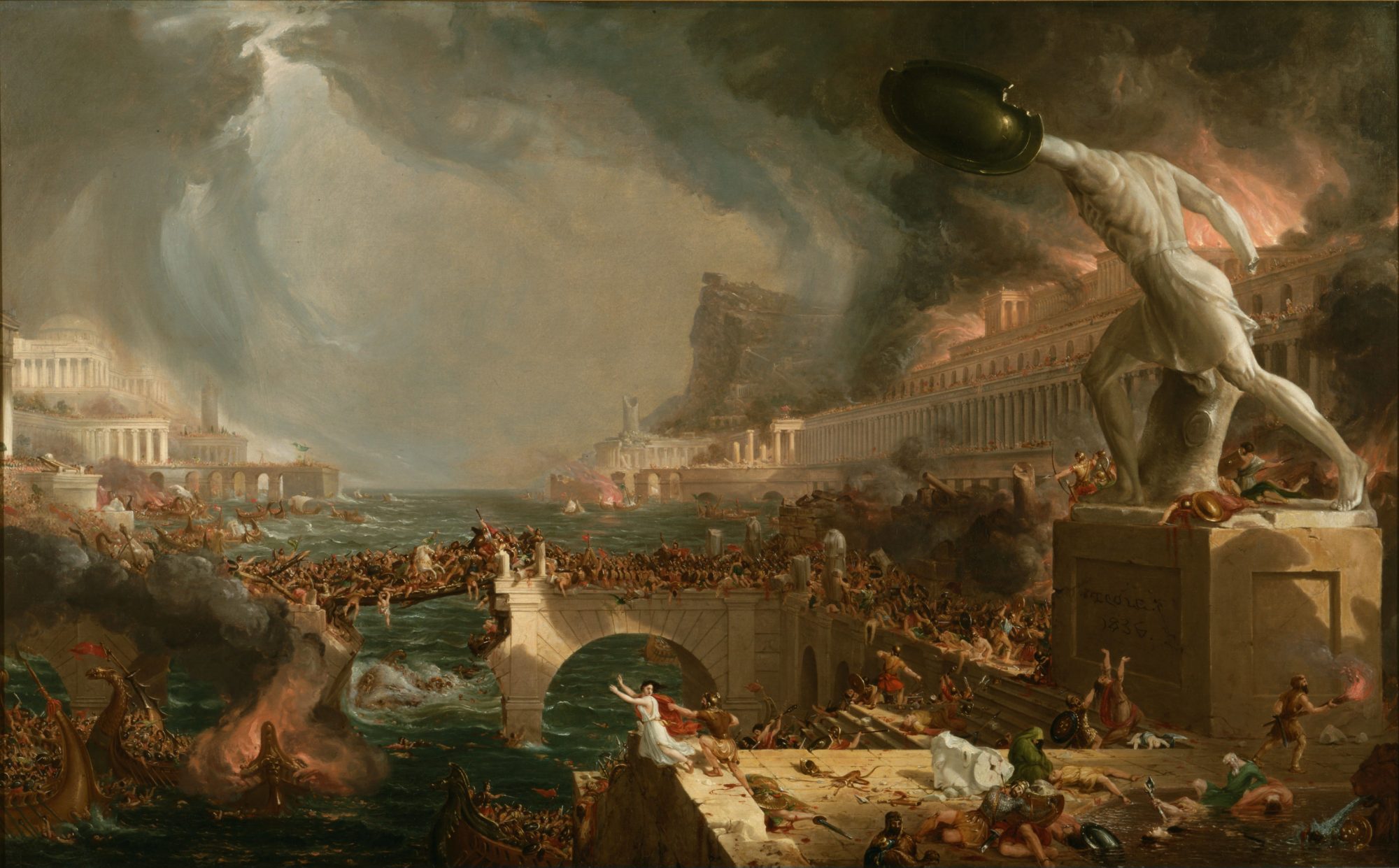 The Course of Empire / Thomas Cole

At some time or another, every historian of Rome has been asked to say where we are, today, on Rome’s cycle of decline. Historians might squirm at such attempts to use the past but, even if history does not repeat itself, nor come packaged into moral lessons, it can deepen our sense of what it means to be human and how fragile our societies are.

In the middle of the second century, the Romans controlled a huge, geographically diverse part of the globe, from northern Britain to the edges of the Sahara, from the Atlantic to Mesopotamia. The generally prosperous population peaked at 75 million. Eventually, all free inhabitants of the empire came to enjoy the rights of Roman citizenship. Little wonder that the 18th-century English historian Edward Gibbon judged this age the ‘most happy’ in the history of our species – yet today we are more likely to see the advance of Roman civilisation as unwittingly planting the seeds of its own demise.

Five centuries later, the Roman empire was a small Byzantine rump-state controlled from Constantinople, its near-eastern provinces lost to Islamic invasions, its western lands covered by a patchwork of Germanic kingdoms. Trade receded, cities shrank, and technological advance halted. Despite the cultural vitality and spiritual legacy of these centuries, this period was marked by a declining population, political fragmentation, and lower levels of material complexity. When the historian Ian Morris at Stanford University created a universal social-development index, the fall of Rome emerged as the greatest setback in the history of human civilisation.

Explanations for a phenomenon of this magnitude abound: in 1984, the German classicist Alexander Demandt catalogued more than 200 hypotheses. Most scholars have looked to the internal political dynamics of the imperial system or the shifting geopolitical context of an empire whose neighbours gradually caught up in the sophistication of their military and political technologies. But new evidence has started to unveil the crucial role played by changes in the natural environment. The paradoxes of social development, and the inherent unpredictability of nature, worked in concert to bring about Rome’s demise.

Climate change did not begin with the exhaust fumes of industrialisation, but has been a permanent feature of human existence. Orbital mechanics (small variations in the tilt, spin and eccentricity of the Earth’s orbit) and solar cycles alter the amount and distribution of energy received from the Sun. And volcanic eruptions spew reflective sulphates into the atmosphere, sometimes with long-reaching effects. Modern, anthropogenic climate change is so perilous because it is happening quickly and in conjunction with so many other irreversible changes in the Earth’s biosphere. But climate change per se is nothing new.

The need to understand the natural context of modern climate change has been an unmitigated boon for historians. Earth scientists have scoured the planet for paleoclimate proxies, natural archives of the past environment. The effort to put climate change in the foreground of Roman history is motivated both by troves of new data and a heightened sensitivity to the importance of the physical environment. It turns out that climate had a major role in the rise and fall of Roman civilisation. The empire-builders benefitted from impeccable timing: the characteristic warm, wet and stable weather was conducive to economic productivity in an agrarian society. The benefits of economic growth supported the political and social bargains by which the Roman empire controlled its vast territory. The favourable climate, in ways subtle and profound, was baked into the empire’s innermost structure.

The end of this lucky climate regime did not immediately, or in any simple deterministic sense, spell the doom of Rome. Rather, a less favourable climate undermined its power just when the empire was imperilled by more dangerous enemies – Germans, Persians – from without. Climate instability peaked in the sixth century, during the reign of Justinian. Work by dendro-chronologists and ice-core experts points to an enormous spasm of volcanic activity in the 530s and 540s CE, unlike anything else in the past few thousand years. This violent sequence of eruptions triggered what is now called the ‘Late Antique Little Ice Age’, when much colder temperatures endured for at least 150 years. This phase of climate deterioration had decisive effects in Rome’s unravelling. It was also intimately linked to a catastrophe of even greater moment: the outbreak of the first pandemic of bubonic plague.

Disruptions in the biological environment were even more consequential to Rome’s destiny. For all the empire’s precocious advances, life expectancies ranged in the mid-20s, with infectious diseases the leading cause of death. But the array of diseases that preyed upon Romans was not static and, here too, new sensibilities and technologies are radically changing the way we understand the dynamics of evolutionary history – both for our own species, and for our microbial allies and adversaries.

The highly urbanised, highly interconnected Roman empire was a boon to its microbial inhabitants. Humble gastro-enteric diseases such as Shigellosis and paratyphoid fevers spread via contamination of food and water, and flourished in densely packed cities. Where swamps were drained and highways laid, the potential of malaria was unlocked in its worst form – Plasmodium falciparum – a deadly mosquito-borne protozoon. The Romans also connected societies by land and by sea as never before, with the unintended consequence that germs moved as never before, too. Slow killers such as tuberculosis and leprosy enjoyed a heyday in the web of interconnected cities fostered by Roman development.

However, the decisive factor in Rome’s biological history was the arrival of new germs capable of causing pandemic events. The empire was rocked by three such intercontinental disease events. The Antonine plague coincided with the end of the optimal climate regime, and was probably the global debut of the smallpox virus. The empire recovered, but never regained its previous commanding dominance. Then, in the mid-third century, a mysterious affliction of unknown origin called the Plague of Cyprian sent the empire into a tailspin. Though it rebounded, the empire was profoundly altered – with a new kind of emperor, a new kind of money, a new kind of society, and soon a new religion known as Christianity. Most dramatically, in the sixth century a resurgent empire led by Justinian faced a pandemic of bubonic plague, a prelude to the medieval Black Death. The toll was unfathomable – maybe half the population was felled.

The plague of Justinian is a case study in the extraordinarily complex relationship between human and natural systems. The culprit, the Yersinia pestis bacterium, is not a particularly ancient nemesis; evolving just 4,000 years ago, almost certainly in central Asia, it was an evolutionary newborn when it caused the first plague pandemic. The disease is permanently present in colonies of social, burrowing rodents such as marmots or gerbils. However, the historic plague pandemics were colossal accidents, spillover events involving at least five different species: the bacterium, the reservoir rodent, the amplification host (the black rat, which lives close to humans), the fleas that spread the germ, and the people caught in the crossfire.

Genetic evidence suggests that the strain of Yersinia pestis that generated the plague of Justinian originated somewhere near western China. It first appeared on the southern shores of the Mediterranean and, in all likelihood, was smuggled in along the southern, seaborne trading networks that carried silk and spices to Roman consumers. It was an accident of early globalisation. Once the germ reached the seething colonies of commensal rodents, fattened on the empire’s giant stores of grain, the mortality was unstoppable.

The plague pandemic was an event of astonishing ecological complexity. It required purely chance conjunctions, especially if the initial outbreak beyond the reservoir rodents in central Asia was triggered by those massive volcanic eruptions in the years preceding it. It also involved the unintended consequences of the built human environment – such as the global trade networks that shuttled the germ onto Roman shores, or the proliferation of rats inside the empire. The pandemic baffles our distinctions between structure and chance, pattern and contingency. Therein lies one of the lessons of Rome. Humans shape nature – above all, the ecological conditions within which evolution plays out. But nature remains blind to our intentions, and other organisms and ecosystems do not obey our rules. Climate change and disease evolution have been the wild cards of human history.

Our world now is very different from ancient Rome. We have public health, germ theory and antibiotic pharmaceuticals. We will not be as helpless as the Romans, if we are wise enough to recognise the grave threats looming around us, and to use the tools at our disposal to mitigate them. But the centrality of nature in Rome’s fall gives us reason to reconsider the power of the physical and biological environment to tilt the fortunes of human societies. Perhaps we could come to see the Romans not so much as an ancient civilisation, standing across an impassable divide from our modern age, but rather as the makers of our world today. They built a civilisation where global networks, emerging infectious diseases and ecological instability were decisive forces in the fate of human societies. The Romans, too, thought they had the upper hand over the fickle and furious power of the natural environment. History warns us: they were wrong.

Kyle Harper is professor of classics and letters at the University of Oklahoma.