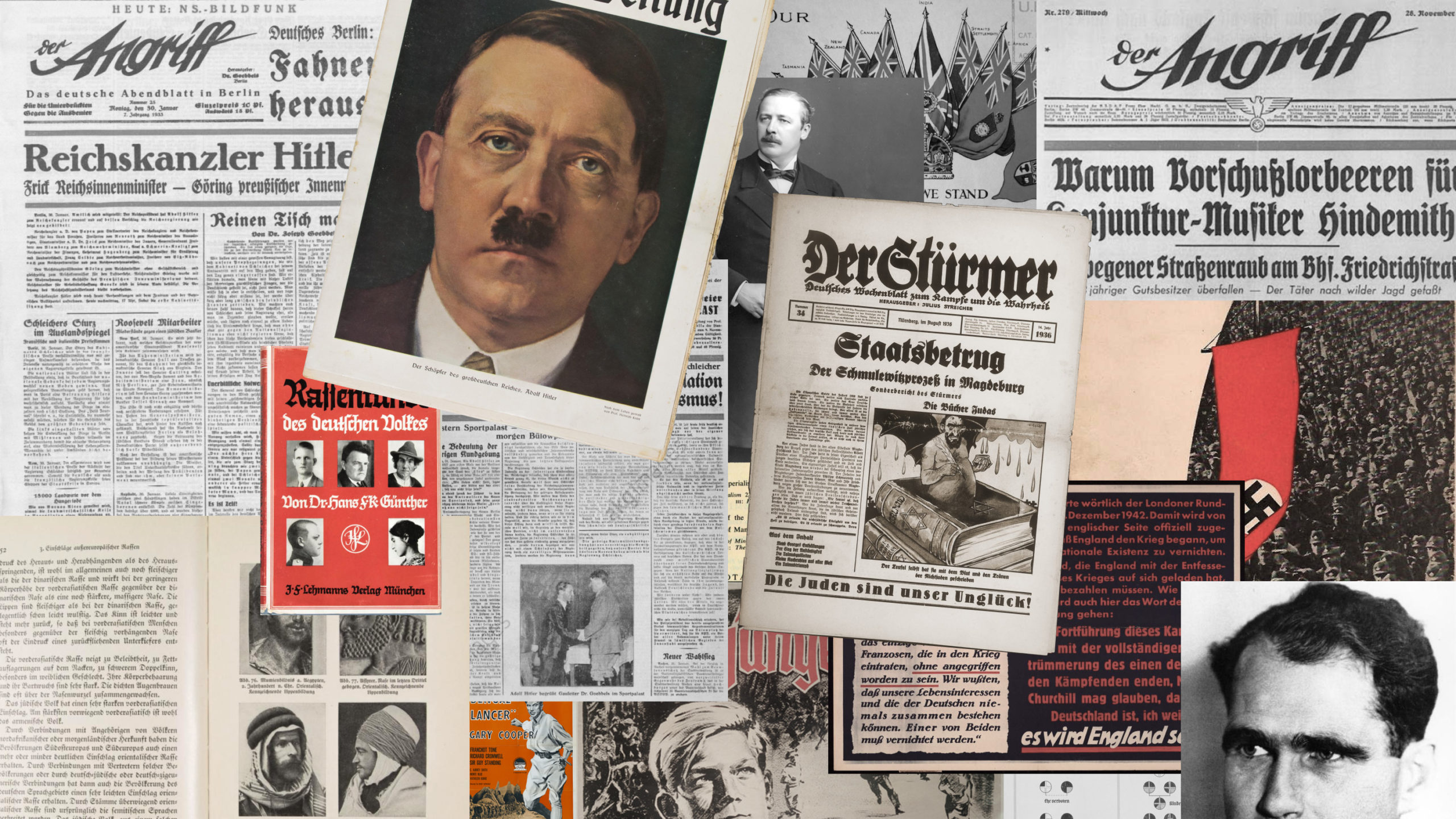 What the British Empire Taught the Nazis

In the 1930s, the Nazis looked to another international order for the inspiration of their own — the British empire.

As the Nazis swept to power in 1933, they viewed a partnership with Britain as a central policy objective. For the Third Reich, Britain was destined to be an ally and a model for Germany to follow. Indeed, not much did more to impress Hitler’s inner circle than Britain’s actions abroad. Nazi sentiment towards the British empire was somewhere between envy and admiration. By the early 1930s, it became a source of inspiration for what the Third Reich could accomplish, first in Eastern Europe and later the rest of the world.

Nowhere was this clearer for Hitler than India, which he deemed as Britain’s most important possession. In Hitler’s view, India was not only strategically valuable, but a symbol of Aryan hegemony. The domination of “brown skinned Indians” by an Aryan people, Hitler believed, was a model that could be replicated in Russia. “What India was for England, the territories of Russia will be for us,” he once remarked. During his discussions with Lord Halifax, the British Foreign Secretary, Hitler claimed his favourite film was The Lives of a Bengal Lancer, since it depicted a “handful of Britons holding a continent in thrall”, demonstrating “how a superior race must behave.” The film later became one of eleven American movies considered artistically valuable by the Nazis in the 1930s.

It was this focus — on a small group of racially superior, Aryan people dominating a native population — that enthralled Hitler. On 27 July 1941, Hitler spoke of “two hundred and fifty thousand men in all, including fifty thousand soldiers” governing four hundred million Indians. Hitler later suggested that the same number of Germans, “plus a cadre of good administrators”, could dominate the space west of the Urals.

The other lesson Hitler recognised from the British empire was divide and rule. “History affords three examples where those who have seized power have succeeded in winning over the people,” Hitler said, “— The Roman Empire, the Holy Roman Empire and the British Empire. In India the British started by dividing the country…in the Eastern territories, our policy should be to encourage the survival of as many religious sects and communities as possible.”

Nazi readings of the British empire were not only aspirational; they were equally educational, teaching the Nazis various strategies to succeed in imperialism. Rudolf Hess, the Deputy Führer of Germany, understood this success through ties between Anglo-Saxon nations. His upbringing in 19th century Alexandria, under the “veiled protectorate” of Sir Evelyn Baring, led him to conclude that all credit in Egypt was due to the British, and that white people — especially those from Britain and Germany — were destined to rule the world. It was for this reason, he believed, that the British and Germans were right to co-operate with each other.

By the mid-1930s, the Nazis therefore became interested in proving an ethnic connection between Britain and Nazi Germany. The central aspect of the British character, they believed, was the supposed Anglo-Saxon urge to rule other nations. As early as 1920, Hitler conclusively identified Britain’s success in its clear sense of national consciousness, which was so “lacking” among Germans. For others, it was Britain’s ability to maintain “racial purity”, which stemmed from Britain’s status as an island.

Britain, in essence, became symbol of Nordic strength, with the British empire itself a benchmark for Germany’s imperial achievements. The Nazis believed that the British had just got it right. They saw them as pragmatic, proud, disciplined and ruthless. Just like Germany, Britain was a story of a small country achieving greatness through luck, skill and relentless determination. Its empire could be safely celebrated, since it represented Germanic virtues. There was no reason why, the Nazis believed, Germany could not replicate this success. The Germans therefore looked to create their own empire, one heavily modelled off British colonialism.

The roots of Nazi interest in British colonialism went deeper than shallow admiration. Focus on the British empire occurred in various places, including the Nazi press. In 1929, the German newsaper Der Angriff, which rarely discussed non-German topics, ran a series of articles focusing on British statesmen who were instrumental in expanding the British empire. It also familiarised its readers with the Battle of Plassey in 1757. By 1933, frequent episodes of British imperial history, which often beared no relevance to contemporary affairs, were showcased to German audiences. The purposes were didactic — to expose the people to the successful ways of the British and provide them with “popular enlightenment”.

India led the way as a prime example. In 1936,  the German magazine Berliner Illustrierte Zeitung explored British activities in India, stating that “Men, such as Clive and Hastings, have often been called adventurers, desperados and murderers…they should be seen, fundamentally, as great statesmen who in all their actions, were mindful only of the interests of their country.” Britain’s imperial record was serving as useful propaganda for the Nazis. It became instrumental in attempts to influence German public opinion by invoking the British example. If Nazi Germany were to achieve a status comparable to Britain, it would have to match Britain’s single-minded pursuit for global power.

As the Nazi regime gained self-confidence, lessons from British imperial history became more and more explicit. In 1939, Berliner Illustrierte Zeitung discussed, at length, Britain’s role in the Fashoda Crisis, eventually concluding that “when the moment came, Britain seized the opportunity brutally.” The timing could not have been more coincidental. The article appeared as Nazi Germany re-entered the Rhineland and saw itself following where other imperial powers had once led. Through is imperial past, Britain demonstrated that the use of violence — or at least the threat of it — was the best method for safeguarding national interests.

The Fashoda Crisis, however, was also invoked by the Nazis for an ulterior motive: to act as a defence mechanism to British criticisms of Nazi foreign expansion. With Rineland, Nazi Germany believed they had “merely invaded its own front garden”. British exercises in Fadosha, however, were clear examples of annexation and the pursuit of British interests. Britain had no right to criticise Nazi expansion, the argument went, as the British had undertaken exactly the same acts of imperialism in Sudan.

British influence on German expansion was not only restricted to annexation. German literature on the British empire also taught the Germans how to rule. Rather than annexing Czechoslovakia outright in 1939, for example, the Nazis proclaimed a Protectorate, just as the British had done with the princely states of India. “President Hacha,” wrote Gerwin Strobl, “would now receive anuncular guidance from Baron Neurath, in the same way that Indian maharajas were assisted in governing their own state by British Residents.” Great Aryan leaders would rule other countries and would guide them to glory. It was for this reason that the Third Reich celebrated various British colonial statesman and administrators, such as Walter Raleigh, Horatio Nelson, the Duke of Wellington and the Duke of Marlborough. Cecil Rhodes himself became the subject of several books, the titles of which revealed the nature of attraction he provided for Nazi readers: The Conquerer, The Dream of World Domination and Greater Fatherland.

The ideological agenda behind German literature on the British empire in the 1930s was apparent. Germany needed to take inspiration, and this could best be achieved by studying a “racial soul” so closely related to theirs. It was not, however, enough for the British empire to be merely studied. For Nazi Germany and its future empire to stand the test of time, the Nazis had to groom the next generation of Germans to uphold the Nazi way of life.

Britain once again led the way in this regard. Through the Hitler Youth, the Nazis claimed kingship with Britain, who produced the Boy Scouts, the Boys’ Brigade and the Cadets. These were viewed as similar movements with similar purposes: the perservation of the British empire, and members of the Hitler Youth were told they were following the British example.

The emphasis placed on the youth was one of character building, and the Nazis saw this as best achieved by visiting Britain and observing “the way the English do things”. After a Hitler Youth visit to the Isle of Wight and Portsmouth in the 1930s, parallels were drawn between the youths of Germany and Britain. Britain, it was thought, had successfully trained its children to be the next generation of world leaders, global statesmen and ruthless imperialists. In this way, British hegemony thrived. If Germany was to replicate this victory, it would have to learn from Britain and adopt the same back at home.

Britain of the first half of the 1900s has often been presented as the polar opposite to Nazi Germany. But at a closer look, both countries were closer in values and ideology than history has taught us. Britain likes to remember itself as everything Nazi Germany was not, but its relationship with the Third Reich was a troubling one of influence, inspiration and imitation. In many ways, this said more about Britain and its empire than it did of Nazi Germany.