Misinformation is running rampant. To slow this infodemic, researchers are tracking how it spreads on social media. 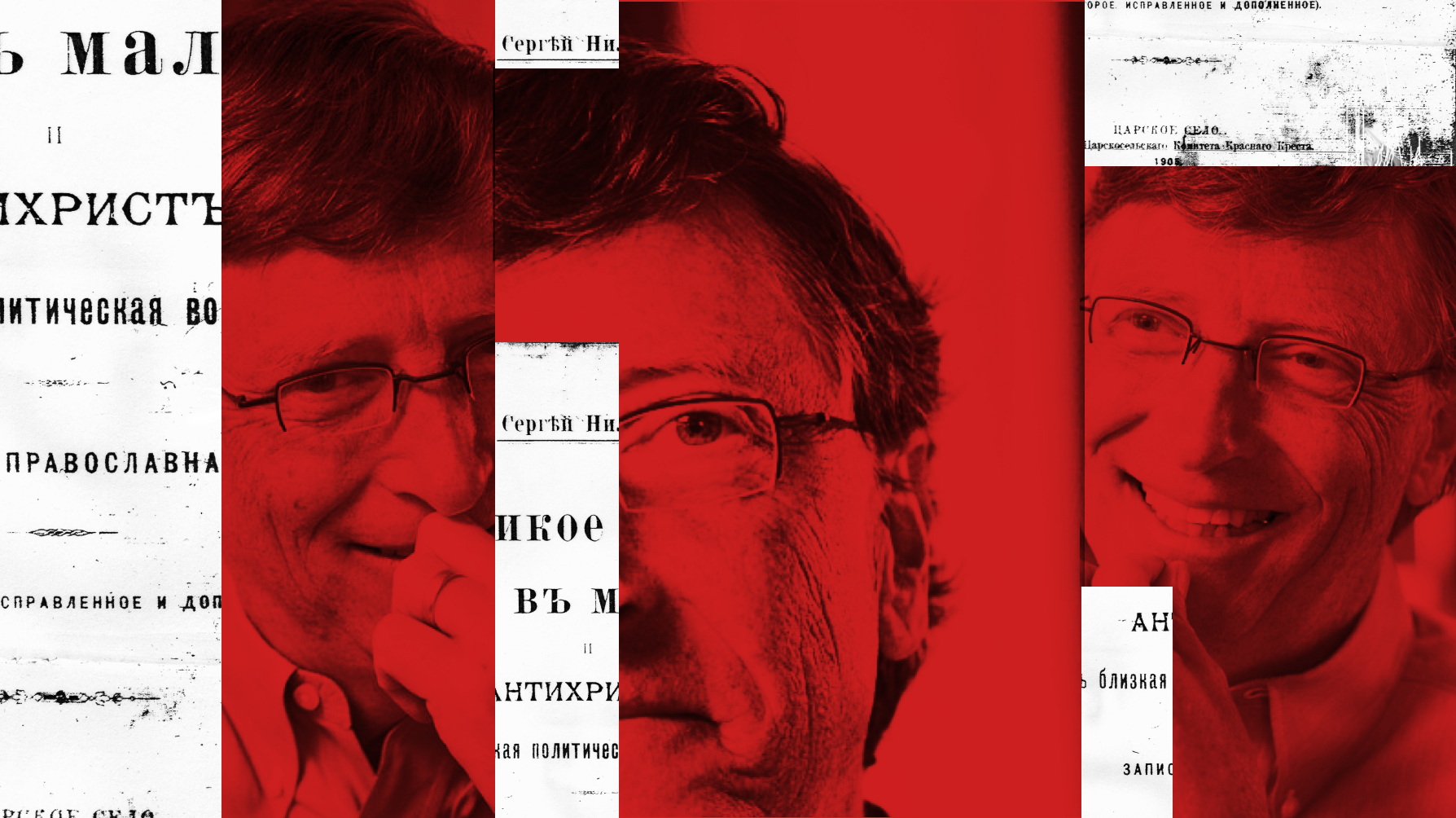 Bill Gates and the Elders of Zion, an anti-Semitic conspiracy text; New Politic

You may have heard the outlandish claim: Bill Gates is using the Covid-19 vaccine to implant microchips in everyone so he can track where they go. It’s false, of course, debunked repeatedly by journalists and fact-checking organisations. Yet the falsehood persists online — in fact, it’s one of the most popular conspiracy theories making the rounds. In May, a Yahoo/YouGov poll found that 44 percent of Republicans (and 19 percent of Democrats) said they believed it.

This particular example is just a small part of what the World Health Organisation now calls an infodemic — an unprecedented glut of information that may be misleading or false. Misinformation — false or inaccurate information of all kinds, from honest mistakes to conspiracy theories — and its more intentional subset, disinformation, are both thriving, fuelled by a once-in-a-generation pandemic, extreme political polarisation and a brave new world of social media.

“The scale of reach that you have with social media, and the speed at which it spreads, is really like nothing humanity has ever seen,” says Jevin West, a disinformation researcher at the University of Washington.

One reason for this reach is that so many people are participants on social media. “Social media is the first type of mass communication that allows regular users to produce and share information,” says Ekaterina Zhuravskaya, an economist at the Paris School of Economics who coauthored an article on the political effects of the Internet and social media in the 2020 Annual Review of Economics.

Trying to stamp out online misinformation is like chasing an elusive and ever-changing quarry, researchers are learning. False tales — often intertwined with elements of truth — spread like a contagion across the Internet. They also evolve over time, mutating into more infectious strains, fanning across social media networks via constantly changing pathways and hopping from one platform to the next.

Misinformation doesn’t simply diffuse like a drop of ink in water, says Neil Johnson, a physicist at George Washington University who studies misinformation. “It’s something different. It kind of has a life of its own.”

The Gates fiction is a case in point. On March 18, 2020, Gates mentioned in an online forum on Reddit that electronic records of individuals’ vaccine history could be a better way to keep track of who had received the Covid-19 vaccine than paper documents, which can be lost or damaged. The very next day, a website called Biohackerinfo.com posted an article claiming that Gates wanted to implant devices into people to record their vaccination history. Another day later, a YouTube video expanded that narrative, explicitly claiming that Gates wanted to track people’s movements. That video was viewed nearly 2 million times. In April, former Donald Trump advisor Roger Stone repeated the conspiracy on a radio program, which was then covered in the New York Post. Fox News host Laura Ingraham also referred to Gates’s intent to track people in an interview with then US Attorney General William Barr.

But though it’s tempting to think from examples like this that websites like Biohackerinfo.com are the ultimate sources of most online misinformation, research suggests that’s not so. Even when such websites churn out misleading or false articles, they are often pushing what people have already been posting online, says Renee DiResta, a disinformation researcher at the Stanford Internet Observatory. Indeed, almost immediately after Gates wrote about digital certificates, Reddit users started commenting about implantable microchips, which Gates had never mentioned.

In fact, research suggests that malicious websites, bots and trolls make up a relatively small portion of the misinformation ecosystem. Instead, most misinformation emerges from regular people, and the biggest purveyors and amplifiers of misinformation are a handful of human super-spreaders. For example, a study of Twitter during the 2016 election found that in a sample of more than 16,000 users, 6 percent of those who shared political news also shared misinformation. But the vast majority — 80 percent — of the misinformation came from just 0.1 percent of users. Misinformation is amplified even more when those super-spreaders, such as media personalities and politicians like Donald Trump (until his banning by Twitter and other sites), have access to millions of people on social and traditional media.

Thanks to such super-spreaders, misinformation spreads in a way that resembles an epidemic. In a recent study, researchers analyzed the rise in the number of people engaging with Covid-19-related topics on Twitter, Reddit, YouTube, Instagram and a right-leaning network called Gab. Fitting epidemiological models to the data, they calculated R-values which, in epidemiology, represent the average number of people a sick person would infect. In this case, the R-values describe the contagiousness of Covid-19-related topics in social media platforms — and though the R-value differed depending on the platform, it was always greater than one, indicating exponential growth and, possibly, an infodemic.

Differences in how information spreads depend on features of the particular platform and its users, not on the reliability of the information itself, says Walter Quattrociocchi, a data scientist at the University of Rome. He and his colleagues analyzed posts and reactions — such as likes and comments — about content from both reliable and unreliable websites, the latter being those that show extreme bias and promote conspiracies, as determined by independent fact-checking organizations. The number of posts and reactions regarding both types of content grew at the same rate, they found.

Complicating matters more, misinformation almost always contains kernels of truth. For example, the implantable microchips in the Gates conspiracy can be traced to a Gates Foundation-funded paper published in 2019 by MIT researchers, who designed technology to record someone’s vaccination history in the skin like a tattoo. The tattoo ink would consist of tiny semiconductor particles called quantum dots, whose glow could be read with a modified smartphone. There are no microchips, and the quantum dots can’t be tracked or read remotely. Yet the notion of implanting something to track vaccination status has been discussed. “It isn’t outlandish,” Johnson says. “It’s just outlandish to say it will then be used by Gates in some sinister way.”

What happens, Johnson explains, is that people pick nuggets of fact and stitch them together into a false or misleading narrative that fits their own worldview. These narratives then become reinforced in online communities that foster trust and thus lend credibility to misinformation.

Johnson and his colleagues track online discussion topics in social media posts. Using machine learning, their software automatically infers topics — say, vaccine side effects — from patterns in how words are used together. It’s similar to eavesdropping on multiple conversations by picking out particular words that signal what people are talking about, Johnson says.

And as in conversations, topics can evolve over time. In the past year, for example, a discussion about the March lockdowns mutated to include the US presidential election and QAnon conspiracy theories, according to Johnson. The researchers are trying to characterize such topic shifts, and what makes certain topics more evolutionarily fit and infectious.

Some broad narratives are especially tenacious. For example, Johnson says, the Gates microchip conspiracy contains enough truth to lend it credibility but also is often dismissed as absurd by mainstream voices, which feeds into believers’ distrust of the establishment. Throw in well-intentioned parents who are skeptical of vaccines, and you have a particularly persistent narrative. Details may differ, with some versions involving 5G wireless networks or radiofrequency ID tags, but the overall story — that powerful individuals want to track people with vaccines — endures.

And in online networks, these narratives can spread especially far. Johnson focuses on online groups, like public Facebook pages, some of which can include a million users. The researchers have mapped how these groups — within and across Facebook and five other platforms, Instagram, Telegram, Gab, 4Chan and a predominantly Russian-language platform called VKontakte — connect to one another with weblinks, where a user in one online group links to a page on another platform. In this way, groups form clusters that also link to other clusters. The connections can break and relink elsewhere, creating complex and changing pathways through which information can flow and spread. For example, Johnson says, earlier forms of the Gates conspiracy were brewing on Gab only to jump over to Facebook and merge with more mainstream discussions about Covid-19 vaccinations.

These cross-platform links mean that the efforts of social media companies to take down election- or Covid-19-related misinformation are only partly effective. “Good for them for doing that,” Johnson says. “But it’s not going to get rid of the problem.” The stricter policies of some platforms — Facebook, for example — won’t stop misinformation from spilling over to a platform where regulations are more relaxed.

And unless the entire social media landscape is somehow regulated, he adds, misinformation will simply congregate in more hospitable platforms. After companies like Facebook and Twitter started cracking down on election misinformation — even shutting down Trump’s accounts — many of his supporters migrated to platforms like Parler, which are more loosely policed.

To Johnson’s mind, the best way to contain misinformation may be by targeting these inter-platform links, instead of chasing down every article, meme, account or even page that peddles in misinformation — which is ultimately a futile game of Whac-A-Mole. To show this, he and his colleagues calculated a different R-value. As before, their revised R-value describes the contagiousness of a topic, but it also incorporates the effects of dynamic connections in the underlying social networks. Their analysis isn’t yet peer-reviewed, but if it holds up, the formula can provide a mathematical way of understanding how a topic might spread — and, if that topic is rife with misinformation, how society can contain it.

For example, this new R-value suggests that by taking down cross-platform weblinks, social media companies or regulators can slow the transmission of misinformation so that it no longer spreads exponentially. Once regulators identify an online group brimming with misinformation, they can then remove links to other platforms. This needs to be the priority, Johnson says, even more than removing the group pages themselves.

Fact-checking may also help, as some studies suggest it can change minds and even discourage people from sharing misinformation. But the impact of a fact-check is limited, because corrections usually don’t spread as far or as fast as the original misinformation, West says. “Once you get something rolling, it’s real hard to catch up.” And people may not even read a fact-check if it doesn’t conform to their worldview, Quattrociocchi says.

Other approaches, such as improving education and media literacy, and reforming the business model of journalism to prioritize quality over clicks, are all important for controlling misinformation — and, ideally, for preventing conspiracy theories from taking hold in the first place. But misinformation will always exist, and no single action will solve the problem, DiResta says. “It’s more of a problem to be managed like a chronic disease,” she says. “It’s not something you’re going to cure.”

Marcus Woo is is a freelance science journalist based in the San Francisco Bay Area.