Is the Party Over For Boris Johnson?

This polling detail suggests it could be. The Labour prime minister Harold Wilson coined the phrase “a week is a long time in politics”, something that has certainly been confirmed by recent events. Up until very recently, it looked like Boris Johnson was unlikely to be ousted from Number 10 any time soon, largely because the Conservatives were not that far behind in the polls. But the leadership problem in the Conservative party has now morphed into something much more serious. It has become a constitutional crisis as well as a political crisis for the prime minister.

Johnson was forced to apologise to parliament on January 12 when he could no longer deny the clear evidence that his staff had gathered in a large group in the garden of 10 Downing Street while the UK was in strict lockdown.

There are two aspects to the constitutional crisis. The first is the matter of lying in parliament. The prime minister claims that the May gathering was a “work event” and therefore could be said to “technically fall within the guidance” of the time. Many will have greeted this assertion with significant scepticism – particularly anyone who faced criminal charges for meeting others outside during the period in question. Back then, people were only allowed to mix with one other person outside their household when meeting outdoors. In-person work meetings were only allowed when “absolutely necessary”.

If Johnson has been lying to parliament by claiming rules were followed when they were not, it is a breach of the Ministerial Code. In the past, this offence has not just resulted in ministers being sacked from the front bench but even in MPs being expelled from parliament altogether.

The Profumo affair in 1963 is a vivid illustration of this. When John Profumo, the secretary of state for war, lied to parliament about his extramarital affair with Christine Keeler, he ended up having to leave parliament. The scandal eventually brought down the government.

The second constitutional issue relates to the police investigation of the party in Downing Street during the May 2020 lockdown. Johnson admitted that he attended this event during Prime Minister’s Questions on January 12. The gathering took place when the rest of the country was tightly locked down. He has claimed the party was a “work event” but if the police investigation finds it did break the rules, it would mean that Johnson and the other participants were committing a criminal offence. Lying to parliament or breaking the lockdown rules are both resigning offences.

That said, the political fallout from the crisis is likely to loom largest. The public backlash is apparent in a recent poll published in the Independent which showed that two-thirds of voters think Johnson should resign. Conservative backbench MPs now know Johnson is no longer an election winner and are likely to be fearing for the security of their seats. If the party is to recover, it will have to deal with this fact.

It is interesting to put Johnson’s crisis in context by looking at the reasons why prime ministers have resigned in the past. Since the end of the second world war the UK has had 15 prime ministers. The most common reason for them to step down was losing an election. This happened to Winston Churchill in 1945, Clement Attlee in 1951, Alec Douglas-Home in 1963, Edward Heath in 1974, Jim Callaghan in 1979, John Major in 1997 and Gordon Brown in 2010 – all of whom lost general elections. We can add David Cameron to the list since he lost the EU referendum in 2016, and also Theresa May because she stood down after losing the European Parliament elections in 2019.

The second most common reason for resigning was ill health. This explains why Churchill stepped down from his second term in April 1955. It also explains why his successor Anthony Eden resigned in January 1957. He had a nervous breakdown following the Suez crisis of 1956 when Britain, France and Israel invaded Egypt after its president, Gamel Abdel Nasser, nationalised the Suez Canal.

Another case was Harold Wilson, who surprised most observers by resigning in March 1976 at a time when there was no particular crisis afoot. It turned out later that he was concerned about his loss of memory and impending dementia, which eventually caught up with him. Thus he counts as a premier who resigned due to ill health.

The two remaining cases who do not fit into these categories are Margaret Thatcher and Tony Blair. The former was sacked by her own party in 1990 when Conservative polling support collapsed after the introduction of the ill-advised poll tax. Blair resigned after constant pressure to do so from his successor, Brown, but his departure came amid his growing unpopularity following the Iraq war. It’s debatable whether he would have passed on the mantle had he not faced such a public backlash. 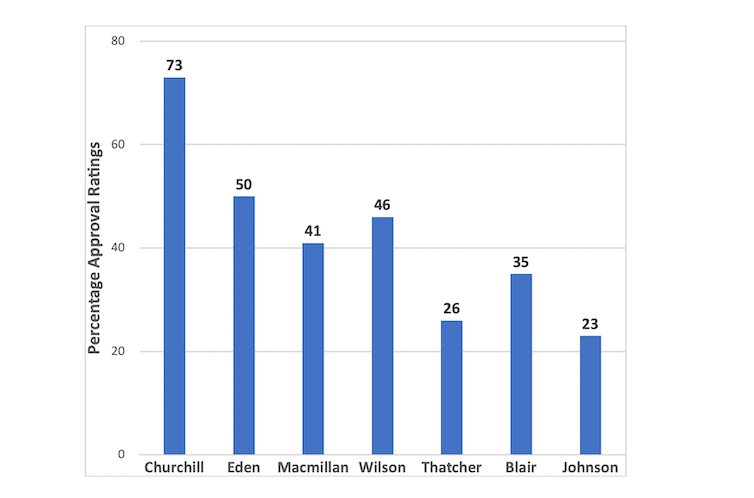 An interesting question is the role of public opinion in all of these resignations. The above chart looks at approval ratings for the six prime ministers who did not resign immediately after an election loss. It doesn’t include those who lost an election since that’s a clear signal that the electorate has rejected a leader.

The chart shows approval ratings for these six prime ministers in the month they resigned plus the current approval rating for Johnson. Clearly, Churchill was very popular when he stepped down in April 1955 so his was a genuine case of illness bringing on retirement. Eden, Macmillan and Wilson all had respectable ratings and Blair was less popular – although he still achieved an approval rating of 35%.

The big standouts are Thatcher and Johnson. However, there is an important difference between them. Both Thatcher and the Conservative party were very unpopular at the time she resigned, with the party polling well behind Labour in voting intentions. Currently, Johnson’s ratings are much worse than his party’s. According to a YouGov poll published just before Christmas, the Conservatives were only 6 percentage points behind Labour in voting intentions.

This is likely to change in the near future as the prime minister’s political problems drag down his party in the polls. That means there is a clear route out of the problem for Conservative MPs – namely to remove Johnson and hope for a recovery in the polls by electing a new leader. The party did this successfully in 1990 when they sacked Thatcher, so many will think that there is a good chance of repeating the exercise this time.

Paul Whiteley is a Professor of Government at the University of Essex.