Returning looted art can be a display of contrition, re-opening dialogues on past wrongs to better establish relationships for the future. 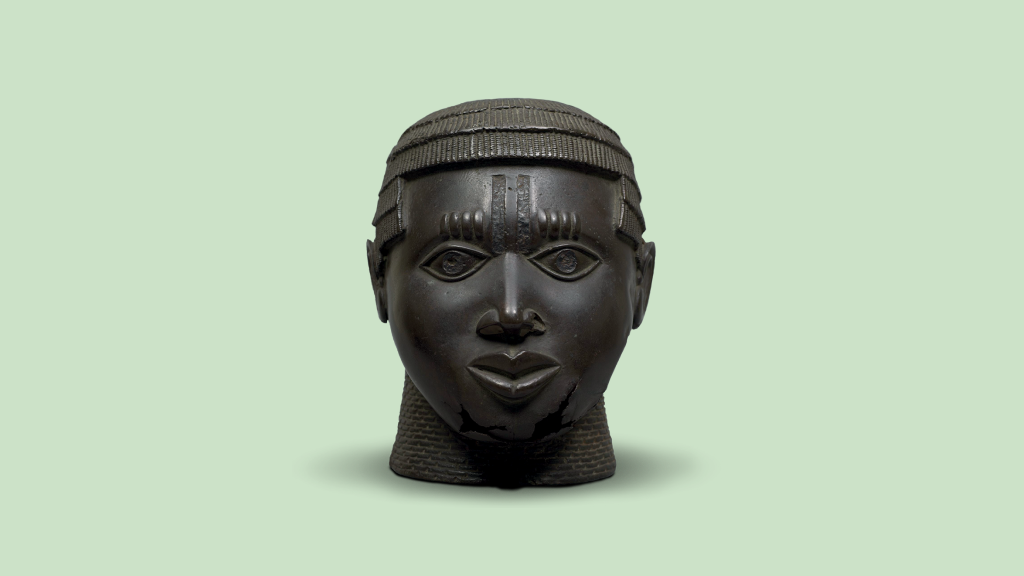 Museums with colonial-era collections have always known about the brutal parts of their biographies. But, through acts of purification via historical distance, they have chosen to ignore them. Museum directors now have to re-think their position as defenders of their collections in light of a different political agenda that locates people and their patrimony in a precolonial, yet radically altered, landscape.

When learning about cultural heritage, you will be directed to the etymology of the words “heritage” and “patrimony”. Whereas “heritage” invokes inheritance, “patrimony” leads us to patriarchy. In French, patrie refers to the homeland, the fatherland, and during colonialism vast swathes of West Africa were brought under this French conceptual model in the 19th and early 20th centuries. Objects taken from West Africa (the periphery) and brought back to the centre/metropole were therefore conceptualised as part of the coloniser’s national identity. They were used in a series of Great Exhibitions and expos to gain support for the colonial project before entering national and private collections throughout Europe.

The immediate paradox here is that, whereas objects from the periphery were welcome in the centre, people were very much not. Since the independence of West African countries throughout the late 1950s and early 60s, the retention of objects and the simultaneous rejection of people has become ever more fraught. Young undocumented migrants from former French colonies stand metres away from the Musée du quai Branly — Jacques Chirac, a museum in Paris full of their inaccessible patrimony. The migrants are treated with contempt while the objects from their homelands are cared for in museums and treated with great reverence. The migrants will be deported but the objects will not be repatriated. The homeland is therefore only home to objects, not people.

Sub-Saharan Africa has a unique demographic profile. By 2050, it is projected that the region will be home to the 10 countries with the youngest populations in the world. Most Western leaders would like to see strong and stable states in West Africa, states that can provide their citizens with jobs, cultural pride and a reason for staying in their countries and building new futures. The return of objects from museums could become central to this nation-building, undoing some of the harm of the colonial project and supporting emerging creative economies.

The objects taken from West Africa during the colonial period indexed many things, most of them problematic and racist. Some objects acted as a catalyst for the creative work of Western artists, and consequently entered the artistic canon as prompts and props (seen in the background of artists’ studios such as that of Pablo Picasso). The objects that Picasso encountered at the Palais du Trocadéro in Paris were the impetus for his “African period” at the beginning of the 20th century, which produced one of his most famous works, Les Demoiselles d’Avignon (1907).

Beyond the influence that non-European art had on many Western artists, some objects, such as the Benin Bronzes (looted by the British in 1897 from the Kingdom of Benin, in current-day Nigeria) entered global art history on their own merit, as unrivalled technological and artistic accomplishments. This recognition came about only after a difficult period of skepticism, when art historians expressed doubt that African artists could produce work of such sophistication.

Thus, the way in which African objects are held and displayed in Western museums can tell us a lot about the legacy of colonialism and the West’s ambivalent relationship towards its former colonies. But it cannot be said to provide generations of young people in sub-Saharan Africa with a rich cultural repository from which to draw.

Regardless of the politics of return, over the next few decades people born in sub-Saharan Africa will be brought up within a vibrant cultural milieu of art, photography, music and film. However, as colonialism was a humiliating experience for many formerly colonised people, it is not hard to see why regaining control over their patrimony would be a step towards the beginning of healing. The return of cultural objects would allow meaningful access to art and cultural knowledge that could fuel the creative economies of these young nations.

The acts of return in themselves are a symbol of strong contrition, re-opening the dialogue on past wrongs to better establish relationships for the future. It seems that behind proclamations of the complicated nature of the process of return lies this more difficult truth. Human remains have been returned from museums to be reburied with dignity. Nazi-looted art has been seized from unsuspecting collectors and returned to Jewish families. Now is the time for colonial patrimony to be reckoned with because patrimony indexes the biographies of those who made and acquired the objects, drawing their descendants into moral relationships in the present. It is now not a matter of if but when objects will be returned, and whether this happens with good grace or through a fractious period of resistance.

The museums’ “cosmopolitan” defence, made for example by Tiffany Jenkins in Keeping Their Marbles (2016), is that only by juxtaposition in global centres can we truly make sense of global art and the experience of being human. This might be true to some extent but the juxtapositions in themselves are problematic: for example, the British Museum houses its Africa collections in the basement. Museums are also bursting at the seams, and what isn’t displayed is housed in vast stores. To date, the logic of the museum is not one of access and display but of acquisition and retention. The defenders of the museum’s patrimony, the trustees, are appointed on the understanding that their primary role is to protect collections for future generations, narrowly defined within the model of nation states. Perhaps if trustees of museums could rethink their role to include descendants of the colonised, as well as the colonisers, they could help reshape a heritage ethic that is alive to the challenges of global demographics.

Charlotte Joy is an anthropology lecturer at Goldsmiths, University of London.