A look at the rarest 50p coins. 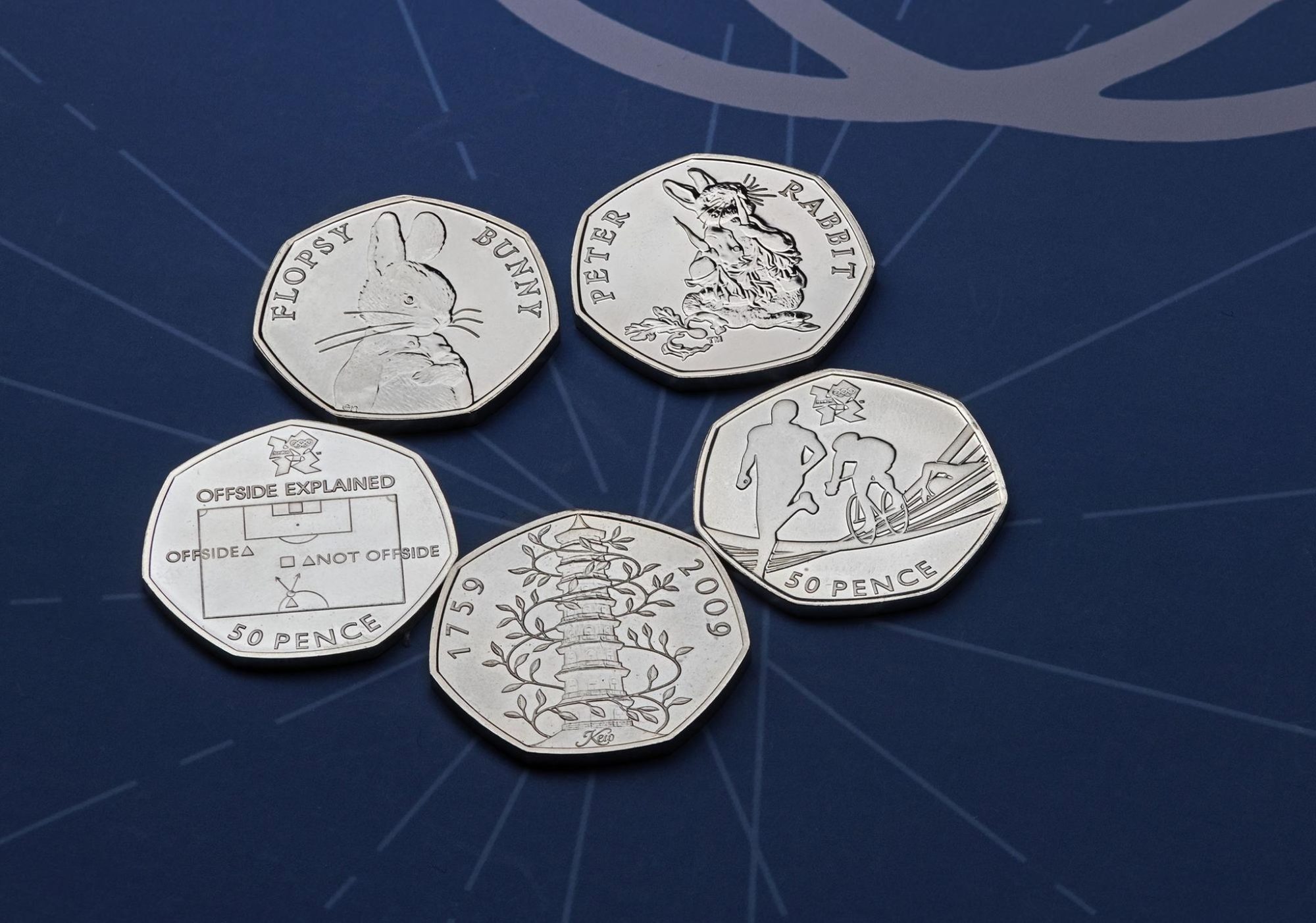 Do you think you might hold Britain’s rarest 50p coin? According to the Royal Mint, the government-owned mint responsible for producing coins in the United Kingdom, there are 10 particularly rare 50p coins, which were revealed ahead of the UK’s 50th universally of its decimalisation.

Released in 2009 to celebrate 250 years since Kew Gardens opened in 1759, your chances of coming across the Kew Gardens 50p coin is slim: just 210,000 were released into circulation. When the coin was first released, this rare 50p coin was worth only £3-4 to collectors, but its value has slowly increased over time. Its mintage became well-known in 2014, and This is Money found that between 2009 and 2020, its value grew by 2,733%. Most coins have a circulation of a few million.

The design on the coin features the Great Pagoda from Kew Gardens, which was built by Sir William Chambers in 1761 for Princess Augusta, after whom Kew Gardens is named. The design also shows a leafy climber intertwined around the Pagoda Tower, designed by Christopher Le Brun RA.

What makes the 2009 Kew Gardens 50p coin so rare is not only its rarity, but its scarcity. While rarity refers to the number of 2009 Kew Garden 50p coins available, scarcity relates to the consumer demand for the coin, which is high compared to when the coin was first released According to Change Checker’s scarcity index, this rare 50p coin has an index of 100 – Very Scarce. Combined with a circulation of only 210,000 (most coins have a circulation of millions), the 2009 Kew Gardens 50p coin tops the list of the rarest 50p coins.

Released to commemorate the London 2012 Olympic and Paralympic Games, the 2011 Olympic Wrestling coin is the rarest of the 2011 Olympic coin designs. Wresting was one of the original sports in the Ancient Olympic Games in Greece, and over time freestyle wrestling grew in popularity. Wresting now finds itself in the Olympic games.

According to Change Checker, this rare 50p coin has a scarcity index of 84 – Very Scarce.

The coin design shows one athlete throwing another athlete to the ground. The design was created by Roderick Enriquez, a Filipino-British graphic designer from London, who said that “I am pleased…because I am a Filipino-British national and this is what I believe London should be about as it is hosted by people with many cultural backgrounds.”

When it was released, the 2011 Olympic Football 50p coin was among the most publicised of all the 50p designs. With a small mintage and high scarcity, the coin is sought after by avid coin collectors.

The design shows a simple illustration of the offside rule, with the image showing a midfielder deciding to pass to a teammate on their left, which would be “offside”, or to the other teammate on the same level, which would be “onside”. The designer, Neil Wolfson, said he chose the image to provoke discussion. “To represent football, I applied some lateral thinking to explain the offside rule,” Neil Wolfson said. “After researching FIFA’s ‘Laws of the Game’, I drafted a scale diagram of a 75m x 105m football pitch. It’s possibly also the world’s only coin to be designed on Microsoft Paint.”

According to Change Checker, the 2011 Olympic Football coin scarcity index of 90 – Very Scarce.

Also part of the 2011 Olympic coin designs, the Judo 50p shows an athlete executing a judo throw on their opponent by gripping their collar and performing a sweeping throw technique, throwing their opponent on the floor. Judo was first established in Japan in 1882, and made its debut in the Olympics in Tokyo in 1964.

This rare 50p coin was designed by David Cornell from Sussex, an artist and former judo practitioner. In an interview with the Royal Mint, Cornell said, “When I saw the publicity about the competition and as a coin designer I thought I would have a go at doing a few of the designs. I did four and got selected for Judo which was my favourite subject because I used to do competitive Judo when I was in my twenties and the particular design that I did was the throw that I got thrown in a contest and I damaged my shoulder really badly and had to give it up. So it’s something I’ve always had a hate, love relationship with because I hated having to stop doing Judo but I still love the sport.”

According to Change Checker, this coin has a scarcity index of 83 – Very Scarce.

The Olympic Triathlon involves 1.5km of swimming, 40km of cycling and 10km of running, performed consecutively. The Triathlon first appeared at the Sydney Olympic games in 2000. The 2011 Olympic Triathlon 50p coin is an homage to this multisport race, and features 3 athletes: one running, one cycling and another swimming, all next to each other. The coin was designed by Sarah Harvey.

According to Change Checker, this has a scarcity index of 80 – Very Scarce.

In 2016, the Royal Mint created a series of 50p coins to commemorate 150 years since the birth of Beatrix Potter, the London-born writer, conservationist, illustrator and natural scientist who authored various children’s books. Her most famous was The Tale of Peter Rabbit, which follows the adventures of a mischievous young Peter Rabbit.

In 2018, the Royal Mint launched the 2018 Peter Rabbit coin, showing an iconic image of Peter Rabbit eating some radishes, after some naughty adventures in Mr. McGregor’s garden. The coin was designed by Emma Noble, a coin designer and engraver.

According to Change Checker, this has a scarcity index of 46 – Less Common

Also issued to celebrate Beatrix Potter’s childhood tales, this coin was created in homage of The Tales of Flopsy Bunnies, which tells the story of two bunnies, Benjamin Bunny and his cousin Flopsy.

The coin design shows Flopsy Bunny in the middle, with a big, protruding whiskers holding a little cape draping over their shoulders. This coin was also designed by Emma Noble.

According to Change Checker, this coin has a scarcity index of 46 – Less Common.

The 2011 Olympic Tennis 50p coin represents the sport of Tennis in the Olympic Games. Its origins lie in 12th century France, where a ball was originally played using the palm of the hand rather than a racket. Tennis was first introduced as an Olympic sport in 1896.

The coin was designed by Tracey Baines, a sculptor and jewellery designer from Peterborough. The 50p coins displays a tennis ball flying over a net.

According to Change Checker, its scarcity index is 71 – Very Scarce.

The ninth rarest 50p coin in the list is the 2011 Olympic Goalball coin, a sport played competitively in over 100 countries. Goalball is a popular Paralympic sport and is designed for athletes with vision impairment. Players play in groups of three, and the purpose of he game is to throw a ball into the opponents’ goal.

Goalball was included in the Olympic Games in 1976, in Toronto, Canada, and it is one of three Paralympic sports featured in the 50p Olympic coins.

The coin was designed by Jonathan Wren, an animator from Buckinghamshire. The design for this rare 50p coin shows a blindfolded preparing to throw a goalball. During an interview, Wren said that, “I  thought by choosing goalball, as it’s a quite fast-paced sport, that it would work well as a bold, single image. I tried to capture the essence of the sport with speed, hence using the whiz lines. On the ball I put a bell hopefully to explain to people who don’t know the sport the rules and something about goalball that they may not have picked up on before.”

According to Change Checker, this rare 50p coin has a scarcity index of 52 – Scarce.

Olympic shooting is split into three separate categories: shotgun, pistol and rifle. A sport that demands precision and concentration, Olympic Shooting was first introduced as an Olympic game in 1986. In all cases, the shooters must shoot a target with precision, sometimes from different positions.

This rare 50p coin was designed by Pravin Dewdhory and displays a shooter wearing safety goggles and noise cancelling headphones shooting a target. In an interview, Dewdhory said, “I decided to choose shooting because I had an idea to take the shattered clay pigeon and I wanted to make a play on taking the 2012 logo and the geometric shapes that come from it and create the segments from the explosion that links back to the branding of 2012 so that was my connection, the idea that the clay pigeon would work with the 2012 branding and how that sport fitted with the idea I had.”

How to find out what your coin is worth

The first step is to ensure the coin you have is not a counterfeit coin. This can be done by taking your coin to the Royal Mint, the government-owned mint responsible for producing coins in the United Kingdom. Although the Royal Mint is unable to value to the coin you have, it can tell you whether or not the coin is legitimate.

The next step is to consult scarcity indexes such as Change Checker, take it to an expert coin valuer or collector, or sell it online. After all, the best way to determine how much your coin is worth is to bring it to the market, either by selling it on eBay or putting it up for auction. A coin is only worth what others are willing to pay for it, just like any other commodity.

The history of the 50p coin

The 50p coin was introduced in 1969 when British currency transitioned to a decimal system. The seven-sided coin came into circulation to replace the 10-shilling note. There were, however, economic reasons for the change: Lord Fiske, who oversaw the decimalisation of the pound sterling, said that the issue would save the Treasury money by moving away from notes and that the metal would ultimately be recoverable.

There have been various designs for the 50p coin over the past few decades. In 1982, a showing “Britannia” design was introduced by Christopher Ironside, displaying the figure of Britannia next to a lion, a key symbol of the British empire. In 1992-1993, another design was introduced, celebrating the UK’s Presidency of the European Council of Ministers and the conclusion of the single market. In 1994, a design showing airplanes and ships in commemoration of the D-Day Landings was introduced, and in 1998, the Queen’s portrait was displayed. In 2015, the Queen’s portrait was updated, overseen by Jody Clark.

Ever since its introduction, the coin has consisted of cupronickel, a mixture of copper and nickel. However, its size, diameter, thickness and mass has varied over time, as different variations of the 50p coin have been recalled, withdrawn and newer versions introduced.