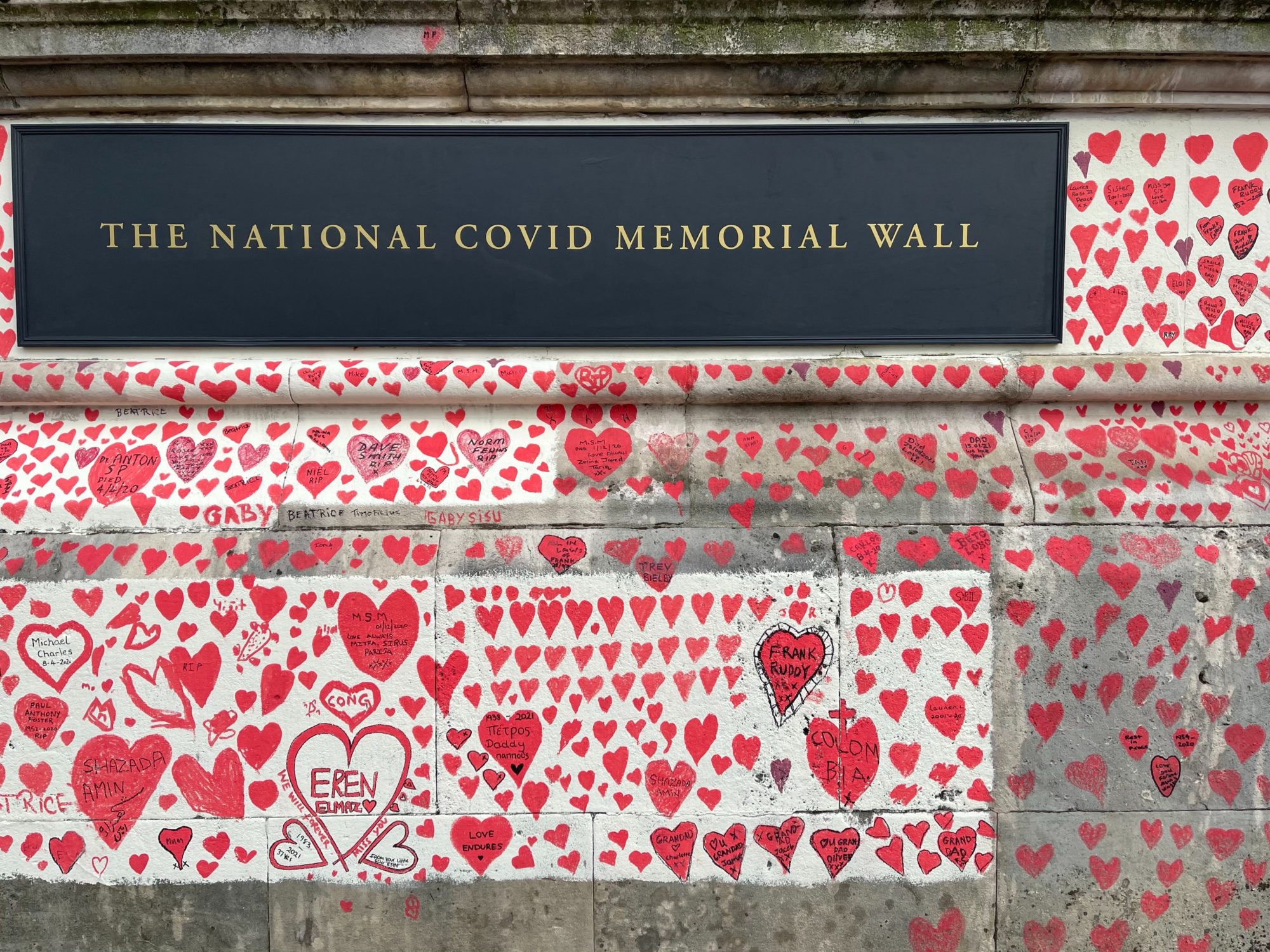 150,000 hearts stretch 500m along the Thames opposite Parliament. Each heart, drawn by volunteers, represents someone loved, who lost their life to Covid / John Cameron

Britain’s fight against COVID-19 has, amongst other things, been a pandemic of firsts. In December last year, a British woman became the first person in the world to receive the Pfizer vaccine, as Britain became the first Western country to begin a mass vaccination effort. In March that same year, Boris Johnson became the first major political leader to make his own diagnosis of COVID-19 public. Now, Britain has recorded, for the first time, the highest daily infection rates since records began (a figure that will soon be exceeded, as Omicron cases double in less than two days).  Recently, Britain has also encountered another first: 170,000 deaths from COVID-19.

170,000 deaths. It’s an astonishing number. For perspective, each year in Britain, on average some 167,900 people die of heart and circulatory disease and 666 people die in drink driving related incidents. 26,000 die from diabetes, and 100,000 from strokes.

It is easy to feel numb with these figures. We are used to the daily statistics of deaths on BBC News. But each person who died during the pandemic was an individual, with aspirations, memories, hopes and experiences. Many were frontline workers who sacrificed their lives for a duty of service towards their fellow citizens. In the end, it was their bravery that saw them through the bleakest of times.

For every 170,000 Britons who died, there are 170,000 parents, daughters and sons who mourn their loss. Many who passed died alone, unable to say bye to their loved ones. Some passed gripping the hands of nurses — originally strangers, but later the only people to provide peace in their final moments. Others said goodbyes to their relatives digitally, using video links as hospital visits were banned. Some funerals were missed, others were attended by only those closest to the deceased. The final moments of those who died were often unpredictable, isolating and unforeseen — just like the pandemic itself.

For many, the pace and frequent prematurity of deaths during the pandemic has been difficult to process. The past two years have been periods of postponed grief, as the pandemic has robbed people of their collective ability to mourn. The ability to recall and rejoice at the life of the deceased with others who knew them well is difficult to do while apart in lockdown. There is a difficult in providing a eulogy and closure. “A massive grief crisis is upon us,” writes Brian Resnick. “— with large, unaddressed mental health and economic implications.”

It is easy to feel despair. The end of the pandemic seems so far away and a new wave once again threatens those who we hold dear. But pandemics, like other once-in-a-generation crises, allow us to ponder what really matters in our lives. For many of during our fight against COVID-19, it’s been our own wellbeing.